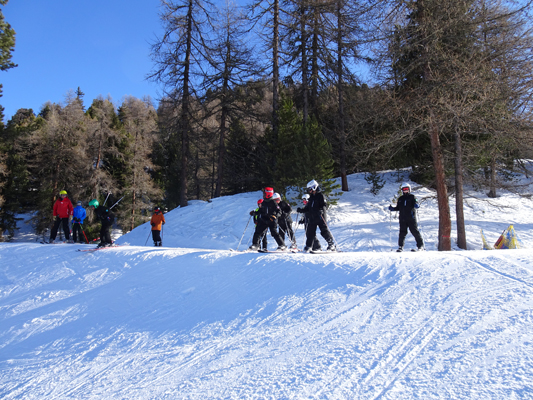 The 2020 Ski Trip to Pila, Italy, was a week never to be forgotten.  It took place between Saturday 11th January and Sunday 19th January and involved 25 students, including 3 Sixth-Formers, who were accompanied by Mr Jones, Mr Bird, Mr Alishah and Mr Griffiths. After waving our parents ‘goodbye’, we set off on our long but enjoyable journey to the Aosta Valley. Fortunately, we were able to depart on an earlier ferry thanks to our coach drivers and, whilst travelling through France, we encountered many captivating views of the mountains and also got a breakfast stop where I was able to practise my almost ‘fluent’ French.

After having arrived in Aosta, we promptly made our way to our ski-fit session, where we ensured our ski attire was a suitable fit.  Interski, our Tour Operator, made the process very efficient and trying on our ski boots, skis and helmets, only took a matter of a few minutes, thanks to the great organisation and use of technology. We then headed off to the hotel, where we unpacked and had lunch, which was most surprisingly pasta – who would’ve thought that!  After digesting our appetising lunch, we roamed around the village where the teachers located a supermarket and so we decided to top up on our snacks and sweets for the week.

The first day of skiing consisted mainly of us getting to know our instructors and going over the main skiing techniques such as parallel turns, although this was different for the beginners’ groups, who focused upon learning how to snow plough. My instructor, Barney, was an extremely advanced skier who even had the opportunity to ski for GB. He did not accept, however, in order to spend time with his girlfriend – true love does exist!  Barney focused primarily on improving our skiing techniques for the first few days, whether it was our balance and posture, our turns and even the position of our skis when skiing down the mountain.

There are always crashes and falls and, on this trip, there were a fair few to say the least! Even the most experienced skiers crash and, in my group, this mainly happened when we went over bumps at high speeds. Barney took our group to the fun slope, where one student attempted to jump over a bump but unfortunately face-planted straight into the snow; he then went on to slide 150m down a black slope after losing his balance and crashed straight into a piste marker – an absolute tragedy if you ask me! Personally, my favourite moment of skiing was when we received the opportunity to ski off-piste in the forests; although it was completely safe, we still had many falls and tumbles due to certain members of the group falling over and causing a domino effect (not mentioning any names). In addition, skiing down ‘The Wall’ (the resort’s steepest piste) was a great achievement, which I hope to match and maybe even surpass in the future.

For lunch, we were fortunate to be served a hot meal on the mountain rather than having to take a packed lunch or come back to the hotel, which was time-consuming on previous ski trips. The après ski activities were extremely entertaining – we had a quiz night, a bowling night, a pool night and a pizza night. For the quiz, we were split into teams of about five and, when the scores came, it was a draw for first place and so our knowledgeable quiz-master Mr Jones had to throw in his killer question for the tie-breaker – “Name a member of The Beatles”. The winners were a team called ‘Versace’ (inside joke). Mr Jones obviously didn’t remember that he’d taught some of us The Beatles’ names on a previous trip!  Pool night was an extremely entertaining night. According to my reliable source Mr Bird, the winner of the pool tournament between the teachers was Mr Bird himself, so we would like to congratulate him on his (alleged) victory!

On our last day of skiing we were on a tight schedule as we had a full day’s skiing and then had to return our equipment, shower and change, finish our packing and eat our evening meal before departure.  When we all arrived at our hotel, our instructors presented us with a certificate and a glamorous badge according to the skiing level we achieved. Finally, we left the hotel and, although it was nice to be heading home, it was also sad that we wouldn’t be skiing the next day. We loaded the coach and set off; I zoned off into watching a movie for the first hour! We slept for a lot of the way back but enjoyed a full breakfast on the ferry before arriving back to school at 12pm, once again earlier than planned.

Overall, the trip was extremely enjoyable but also physically demanding and, most importantly, educational, particularly for the first-time skiers. We had many moments of laughter over several occasions, whether it was at the bowling night or even during nights in at the hotel – I can assure you that all the students couldn’t have asked for a better time. This was all thanks to our hard-working teachers as well as Interski, who all put in the effort to organise our trip so it ran as smoothly as possible. Let’s hope that future ski trips are just as entertaining and rewarding! 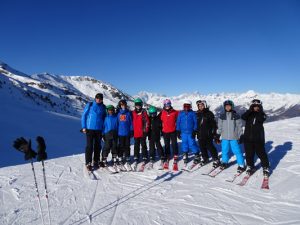 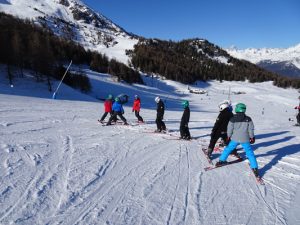 Please click here to view more photos in our gallery.